What was it that enabled Scandanavians to leave their countries and invade, trade and explore from the 9th to the 11 century? 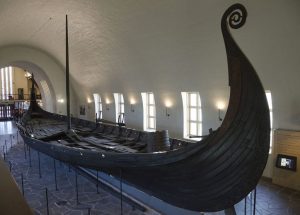 The ship shown here is the Osberg Ship found in a burial ground on a farm in 1903. 90% of its timbers are original. To learn more about the story of this ship go to https://www.khm.uio.no/english/visit-us/viking-ship-museum/exhibitions/oseberg/the-story-begins/index.html

So, what was so special about Viking ships that made them rulers of the waves.

They were lighter in weight and clinker-built. Clinker built means that each plank overlapped the last one. The planks were taken from oak trees split into planks one inch wide and followed the tree’s fibres, which created strength. The prows were sharp. The keel was t-shaped and formed the spine of the boat. The keel was made from an oak trunk, which was gradually cut down to size: first, it was roughly cut into a square profile and from there, the more detailed work in shaping the keel began.

Viking warship.  Some could carry up to one hundred men. The figurehead meant ‘be afraid’.

Because the ships were lighter and shallower, they could go where no ship had gone before (sound familiar). Check out this map of the Scandinavians’ journeys. 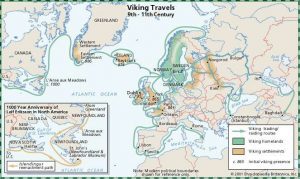 Generally speaking, the Norwegians went west, including the tip of Scotland, Ireland, Greenland and America; the Danes hung around England and Europe; the Swedes went east, Russia (now) Bagdad and Constantinople.

To follow their adventures, read ‘Sailing to Byzantium’. Check the BOOK tab for details.

Member of the Federation of BC Writers

I had a dream – a real dream. When I awoke, I began to write ‘Tangle of Time’. The dream and Shakespeare gave me my character and settings; a midwife, a longbowman, and Yorkshire, my birthplace.