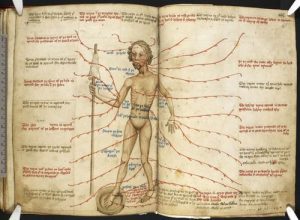 Last month’s blog contained an typo that readers noted and gave me inspiration for this month. I wrote medical musings instead of medieval musings. So the title of this month’s musing is:

Don’t get sick in the Middle Ages

After doing some research on health in the Middle Ages, I have come to realise that this is a topic for a PhD Thesis. Not going to happen! So I’m going to hit the high points.

Let’s start with the players in Middle Age Health Practices

He (notice the he) would have received an education at one of the Universities. Only treated the rich. Physicians followed the teachings of Galen, a Greek born in 130 AD, and the teachings of Aristotle and Hippocrates. They believed that balancing the body fluids, the Humors, would cure the patient. 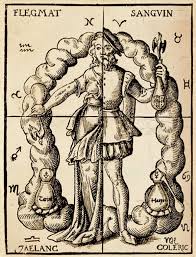 THE CURE FOR UNBALANCED HUMORS: 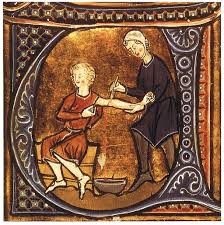 BLOOD LETTING. Probably killed more victims than the disease. Either sharp knives or leeches did the job!

Inferior to Physicians and belonged to the Company of Barber Surgeons

Mainly learned their skills on the battlefield. War has taught medicine many skills, useful in today’s Emergency Departments.

TOOLS OF THE TRADE: OUCH!  NO ANAESTHETIC.

The Barbers were inferior to the Surgeons, although they also belonged to the Company of Barber Surgeons. They were only allowed to pull teeth or let blood – again – no anaesthetic!

The usual route that most people took was to visit the apothecary, or dispenser of drugs. The Apothocaries belonged to the Grocer’s Guild and sold sweets, cosmetics and perfumes as well as drugs. Just like today! 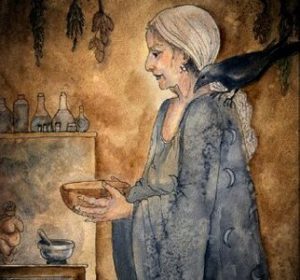 The local wise woman was often the first person contacted by poor people who used various herbs to produce home made medicines and potions.

Mistress Meg Wistowe in my novel, Tangle of Time, was the village wise woman in the 1500s. She delivered the babies and tended the sick, making up her own medicines from herbs and teaching her niece Annie, a visitor from the twenty-first century. In the story she is also a witch, but that is fiction.

In real life thousands of wise women across Europe were burned at the stake: their crime being a threat to the church and the newly emerging physicians.

Played an important role in health care. It was assumed that diseases of the body resulted from sins of the soul. Many people did not bother with Middle Ages doctors instead they sought relief from their ailments through meditation, prayer and pilgrimages.

Where did that leave the people…

Babies died at a high rate from about 30% to 50%, either shortly after birth from unknown causes, or myriad infections, (germs were not known), or accidents. 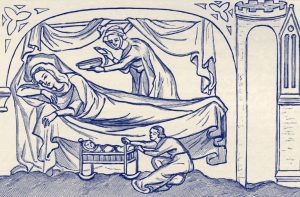 Death was at the centre of life in the Middle Ages in a way that might seem shocking to us today. With high rates of infant mortality, disease, famine, the constant presence of war, and the inability of medicine to deal with common injuries, death was a brutal part of most people’s everyday experience. (British Library).

Consider the Black Death, the Pestilence, the Plague. In its repeated visits, it killed off up to 50% of the population causing massive changes politically and socially. For example, it ended the Feudal System.

Hurray! Not enough serfs. It ended the power of the church because the church couldn’t save the people.

Physicians had no idea what caused the Bubonic Plague.

A person wearing a hat, a mask suggestive of a bird beak, goggles or glasses, and a long gown. The clothing identifies the person as a “plague doctor” and is intended as protection. Descriptions indicate that the gown was made from heavy fabric or leather and was usually waxed. The beak contained pungent substances like herbs or perfumes, thought at the time to purify the air and helpful in relieving the stench. The person also carries a pointer or rod to keep patients at a distance. (Library of Medicine)

We now know that plague is caused by a bacterium called Yersinia pestis that often infects small rodents (like rats, mice, and squirrels) and is usually transmitted to humans through the bite of an infected flea.

We’ve dealt with bloodletting, prayers, surgical instruments: now we’ll look at some stuff that worked and at my favourite remedies – Public Health. I was a Public Health Nurse once!

This is a medieval recipe for an ointment to cure headaches and pains in the joints:

(Thanks to ‘The Knight with the Lion’)

Bald’s Leechbook, Bald’s Salve for eyes. It requires garlic and alliums, which could either be onions or leeks. These are mixed with wine and ox gall. The mixture is then put in a brass vessel and let stand for nine nights. After straining and clarifying, it is put in a horn and applied to the eye with a feather. Recent research shows this works!

Take a live snail and rub its slime against the burn and it will heal.

A nice, simple remedy – and yes, it would help reduce blistering and ease the pain! Recent research has shown that snail slime contains antioxidants, antiseptic, anaesthetic, anti-irritant, anti-inflammatory, antibiotic and antiviral properties, as well as collagen and elastin, vital for skin repair.

Last one: For GOUT.

Take an owl and pluck it clean and open it, clean and salt it. Put it in a new pot and cover it with a stone and put it in an oven and let it stand till it be burnt. And then stamp [pound] it with boar’s grease and anoint the gout therewith. Not sure about this one!

Biggest single cause of disease in medieval times

People did wash regularly, contrary to popular belief, but only the rich had hot water and soap. Water had to be brought from the river or a well. Skin diseases were common. Leprosy was incurable ans sent people into isolation.

I love this one: Rushes covering the dirt or flagged floors were seething breeding grounds for bacteria as the old rushes were not cleared out, could lie there for years. Ugh!

Roofs made of straw hid many rodents and small animals. “Raining cats and dogs” a saying from the result of heavy rain fall driving the creepy crawlies out.

If you enjoyed my musings, please tell your friends about my website. https://maureenthorpe.com

You can also find me at https://www.facebook.com/maureenthorpewriter/

If you would like to receive my monthly newsletter, just add your name and email to the form on the front page.

I had a dream – a real dream. When I woke up, I began to write ‘Tangle of Time’. Before becoming a writer, I was a nurse, a running coach, a yoga teacher and a Shakespeare addict. The dream and Shakespeare gave me my characters and setting – a midwife, a longbowman, and Yorkshire – where I was born.

‘Tangle of Time’ is about magic; about a young woman discovering she is from a long line of witches and scared of her power. Did the creativity spell send her tumbling through time, or is someone else in control? A medieval Yorkshire village is a dangerous place for a witch from today’s world, especially when she investigates murder. She will need all the help she can get to avoid the flames.